Why the woman appears to be lying down?


This is called foreshorten , and is used a lot in drawing....
It will occur when the object have a relative depth from the person that is drawing , so the parts that is close will be bigger than the parts that is far away.
i usually see a lot of drawings , and think : There is something wrong in this drawing ...;the model don't appear to be lying down, she appears do be " stand " in a lying down position.... as like she was hanged by wires in a crazy puppet show ! Unfortunately this kind of bad drawing is very very common. Foreshorten is specially tricky because your brain knows that for example the distance from toe to the pubis is more or less half way from pubis to the top of your head , but when draw you have to forget about you know to do only what you are seeing, otherwise the drawing in a foreshorten position will never be right , so the figure will never appear to be lying down.


if you observe a children drawing , you will notice that the children will represent what they know that exist , not what they are seeing or recalling. When you ask a kid to draw a side-face head , they usually put two eyes , and two ears ... because they know that a face have two eyes, so the mix it up. this can be in the four wheel of a car or four sides of a house , etc . We adults are not so naive, but in foreshorten , our brain try to mistaken us a lot . 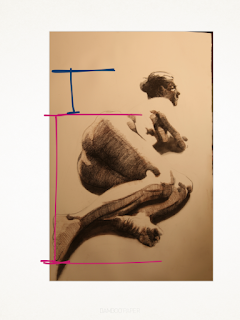 at the first images you can notice how big is the difference between the first plane and the backplane. See how any feet( because the are closer to me) is bigger than the point of the top of hip to the top of the head .

in the second image is just the opposite, the block of the closer hand and head has the same size in vertical as the top of the higher ear to the higher hand( higher point on paper) , alone the head have almost the size in vertical as the two thighs and finally how the closer hand is much bigger in comparison the farther hand.
Postado por esoares@ccard.com.br às 10:31